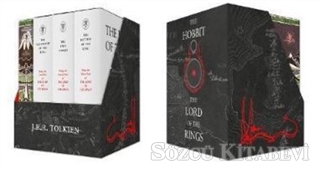 The Hobbit & The Lord of the Rings Gift Set: A Middle-earth Treasury

https://www.sozcukitabevi.com/Kitap/j-r-r-tolkien-the-hobbit-the-lord-of-the-rings-gift-set-a-middle-earth-treasury
The Hobbit & The Lord of the Rings Gift Set: A Middle-earth Treasury
HarperCollins Publishers
451.00

Deluxe boxed gift set of pocket edition hardbacks featuring J.R.R. Tolkien's most popular works, which together tell the tale of Bilbo and Frodo Baggins and of the War of the Ring.

When they were first published, The Hobbit and The Lord of the Rings became instant classics. Treasured by readers young and old, these works of sweeping fantasy, steeped in unrivalled magic and otherworldliness have sold more than 150 million copies around the world.